Every now and then (every 8 years or so, in my case) there comes a time when for some reason, you need or want to give your eyelashes a break from extensions. In my case, it was just that I’d had my eyelash extensions on for almost 8 consecutive years, with only a break of a day or two where they were off. Out of morbid curiosity, I felt that I needed to see what my natural ones were like, and let them breathe for a few weeks.

You see, I’d had recent thoughts like “what if, one day, I become stranded with Mr. Lash on a remote Island, all my extensions gradually fall off, and he’d see me for the plain, short-lashed girl that I am?!”

Or… “What if, one day, Australia is invaded by a totalitarian ruler who does not allow cosmetic enhancements of any kind, and EVERYONE has to see me for plain, short-lashed girl that I am”

You know, pondering the deep stuff.

So off I trot to Lady Lash (where I work, so I did not really trot, more sauntered) where one of my lovely co-workers removed my eyelash extensions for me. For those of you who’ve never had this done, it involves the technician panting a gel-like substance onto your extensions, which dissolves the adhesive. The extensions are gradually wiped off, and there is not pulling or damage to your lashes underneath. The gel is very clever in that it can tell what is synthetic (i.e. adhesive) and what is organic (i.e. your eyelashes) so does no damage. Shortly we will post a video of exactly what this looks like. It’s an unusual feeling, a bit like someone else wiping off your makeup with a little tiny paintbrush.

I had a good hard look at them, in a magnifying mirror (always a horrifying prospect, but necessary sometimes). They were actually fine, they pretty much looked exactly as they were a decade ago, pre-lashes. I wish I’d taken photos of my lashes 8 years ago, to prove a point, but did not. Although a couple of years ago, the lovely Jane Worthington from Women’s Weekly did a test over a few months to see the same thing, and came up with good results, see below: 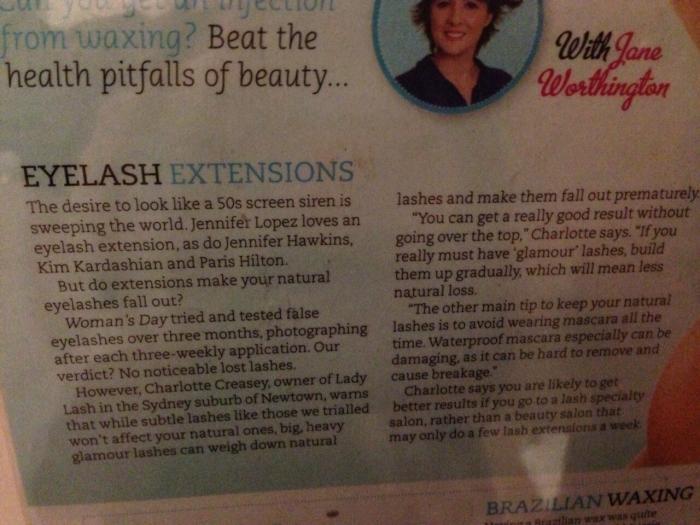 However, being the horribly vain person that I am, there was no way I was going to walk around for the next month without the long sweeping eyelashes that have been a part of me for so long. So, just a few hours later, I applied a brand new set of our ‘Lady for a Night’ faux-mink false lashes (as in stick-ons, not extensions) to get me through the next couple of weeks while on my lash-sabbatical.

Now, false lashes are not my bag at all, but these ones are actually ok. Lady for a Night lashes are really soft, not plasticky and hard like a lot of falsies we see. They are graduated, in that the hairs aren’t the same length all the way along, which makes them look realistic. We had them made this way, to look like extensions as much as possible.

So, I popped them on, and to my absolute delight, no one could actually tell that they were false lashes. I might add that it actually took me about 5 attempts to get them on straight, and for most of the first day I lived in fear of them pinging off my face and into someone’s coffee. Which is why I much prefer extensions. But, in my opinion, they are a very good second option.

Here are some photos of some of us Lady Lashers wearing them. We have about 15 different styles, so there’s something for every one. Quite a few of the styles are very natural looking, to try and mimic eyelash extensions. Some are full on glamour queen with diamantes and whatnot, for those special times when you want to look like a Kardashian.